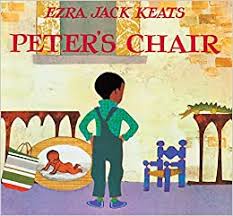 I review another of my favorite diverse picture books.

“A little sister can mean big trouble!” Ezra illustrates the problems and worries that Peter has when he has to adjust to having a little sister. Peter is ready to play as usual until he notices that his crib has been painted pink for his sister. As he becomes aware things that were once his are now being painted pink for his sister. He finds a chair that he wants to run away and hide it. His plan doesn’t work, and he discovers why.

When my children were small, Ezra Jack Keats was one of the first writers who illustrated African Americans in stories. For my grandchildren, I wanted to pass his stories on to the next generation.

← Book Review. My Family Plays Music by Judy Cox.
My Inspiration to Write ‘How Old is Grandma?’ →